Annual visit of the gipsies 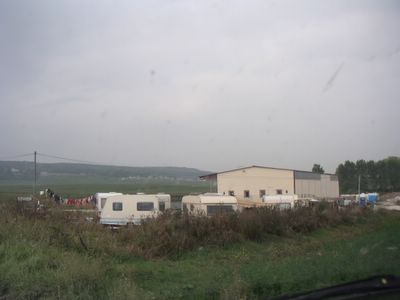 Gypsy camp outside Chigny-les-Roses in the Montagne de Reims.

With the grapeharvest just around the corner still more gypsy caravans arrive in Champagne. Earlier this year than normal due to a big religious meeting in our neigbouring department, Moselle. This has send more corteges of camping cars through the area than usual. Some are just travelling through, others seem to wait for some days or weeks of work during the vendange.

And as often when it comes to the gipsies - the travelling people is the French euphemism - their presence bothers many locals.

Complaints and negative mentioning
The whole range is covered in an anything but objective choice of words in the local newspaper. In several articles it talks about an "invasion" of the lay-bys of Reims without bothering to mention that the official area for campingcars currently is being renovated. It mentions complaints at mairies, prints negative quotes from neighbours about the gypsy women, who with pleading eyes and begging tones go from door to door to sell, what their call the finest of craftsmanship to exorbitant prices.

Now, I know from experience that in these small winegrower's villages it may not take very much before a neighbour might feel so bothered that he will complain to the local authorities rather than have a word with you. Our carpenter for instance put his car outside our house to have an easier access to his tools and materials. Some neighbours could hardly pass in the street. So they complained.

Garbage as a souvenir
What I understand much better, is people who get angry when they have to clean out the garbage and worn-out stoves and fridges, that the gipsies often leave behind, when they move on.

But since the gipsies work for the winegrowers, the commune could also choose to pass on the bill of cleaning. Everybody knows who harvest for who anyway.

This rather dirty aspect of the vendange has been discussed on lots of meetings between winegrowers and their representatives during spring. The employers have again and again been asked to assign land at the disposal of the gipsies to avoid angry neighbours.

I have no idea if anybody will actually comply with such a request. I have just noticed how miserable the land is where these travellers often camp during the vendange. And I have wondered that anybody should have to put up with that. One of the answers I get is that the gipsies only get facilities at a more reasonable level - toilets is one of them - when they have signed for jobs.

Until then they must use the official land for their purpose. If they find it, because according to the August 12th-13th edition of Le Figaro less than one third of the compulsory amount of areas have so far been established (30 percent). Maybe this at least partly explains why there are so many illegal temporary settlements here. Cities with more than 5.000 inhabitants must have such a camping ground.

Cheated on, badly
This year I had already made up my mind. As the first gypsy woman rang my doorbell, I had already decided to buy something. Unfortunately the first one this year did not have any of the homewoven baskets, that I had decided to go for. This one had a lot of bric-a-brac in her bag. As my descision was already made, I guess I was a really, easy victim.

I got the whole ride anyway, that I am a beatiful and good human being and so on, even I told her straight away that I did not need flattery to buy something. I would rather deal with it fast.

Now after living in a little village in more than two years, I have learned not to let in any sellers. If we trade, we do it in the gate... no one will see anything we have they can come back and steal. But I do wonder a bit about my new habits. Am I developing the same kind of suspiciousness as the locals? Or could it be linked with the vegetable seller from Brittany who cheated on me just before last year's grapeharvest?

The gypsy woman cheated on me too of course, badly. But I hardly have to mention that. She is after all a professional in that kind of business and I am not. What I am not going to say is what I bought and how much I payed. Alain will never discover it even it is visible every day.