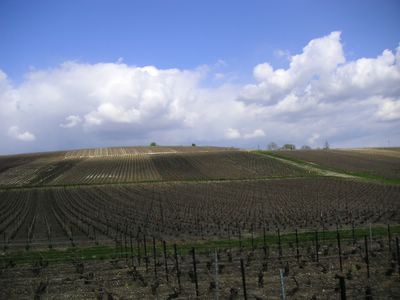 Bright blue April sky at our vineyard in Loisy-en-Brie.

A freezing cold last weekend of April is over, and almost 200 new Meunier-vines in the ground. This weekend boasts an icy wind, and even the sun has the power to warm well now, it cannot really force temperatures past 10 degrees Celsius. It is not often that it makes its way through the low and fleecy clouds.

The weather will not really shape well this year... 2006 still applies as the coldest spring within living memory. 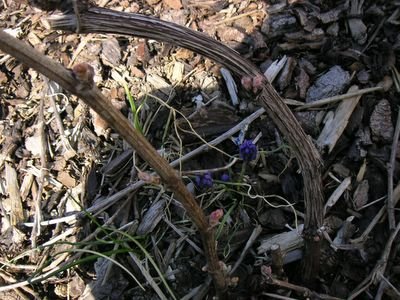 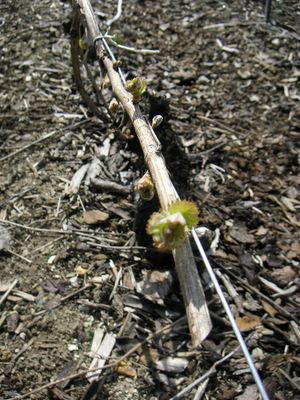 The difference in the development of the Meunier and the Chardonnay is striking.

The vine grows despite the cold
However, even it is cold, the vines are still able to develop. Our Meunier-plants have not made it far beyond the pink point.

A couple of hundreds of Chardonnay, planted by mistake in the middle of the Meunier-vines, are further advanced as this variety develops earlier. They are about one week ahead and already unfolding the third and fourth leaves.

We have not yet - despite the cold - had frost in the night, but we are in the middle of the very fragile zone... close to zero... where frost can destroy a part of the potential crop of the year. 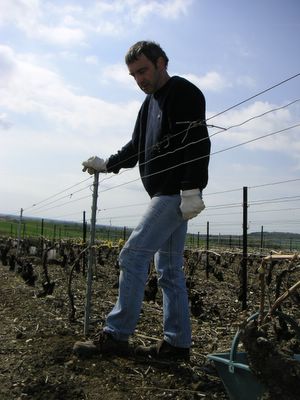 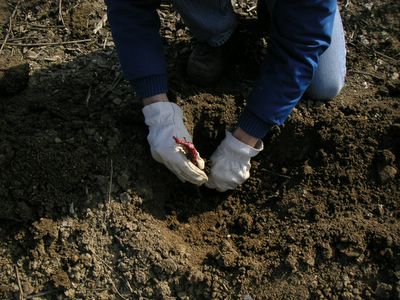 Alain manages to put almost 200 Meunier-vines in the ground during two busy days.

From cows to vines
Alain continues the work: Holes must be digged, good mould put into the holes and the soil around the little vine well placed and almost covering the plant to protect it the best way possible.

The quality of the soil is very uneven. It does become better as he works his way through the rows. From the yellow, sticky and hard clay of the first rows and into the looser silt (mix of sand and clay), that is both better and more easy to work.

This plot was a pasture for cows just one generation ago. The soil has never been worked through to make it more even, which explains the difference of quality.

It is our good luck that it has always been within the AOC-delimitation - that is as long as the AOC-Champagne has existed (1927) - and this is why it has been possible to plant vines here. Today a much better business than cows, but that was not the case when Alains's father had his cows here. Times change, and I find it thought-provoking how fast it actually has happened 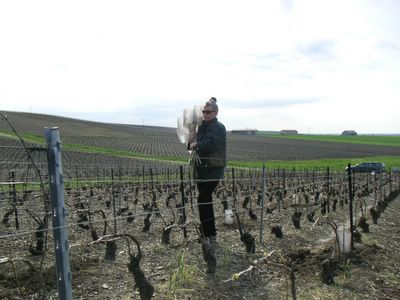 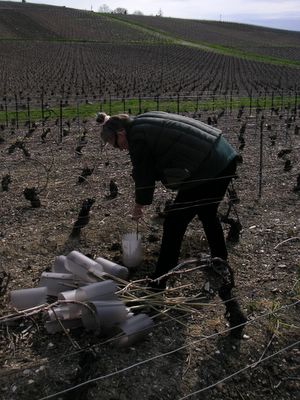 My job is to unite, transport and put the protection.

New protection
The plastic protections is my department. I can work one and a half hours before my pregnant body wants to rest. Then I drive back to the farm of belle-mere to unite another 100 plastic gadgets.

The great thing about it is to work under a blue sky, with birds singing out loudly and sporadic rays of sunshine on your cheek. Late in April as we are the snails have now emerged, and the ground is dotted with little bulbous flowers known as pearl leek. It looks nice, and in its own way it contributes to my experience of wine growing as being closer related with gardening than with farming.

I may even begin to think that work under the blue sky of our Lord is a simple human right. Even this was a completely unknown phenomenon to me less than three years ago. The major part of 15 years I spend working at my desk in various offices.

My mother-in-law says that she never used these protection gadgets. They have been too time-consuming to prepare, I suppose, at least in a farm with both traditional farming and vineyards. It is likely that the practice has been different in pure vinefarms like the ones we find in Verzy.

As the weekend ends, we have only eight rows to finish. That is around 75 plants. Just enough to fill a workday of Alain during the week. But at least a long wished for and needed project in the vineyard will then be finally finished. 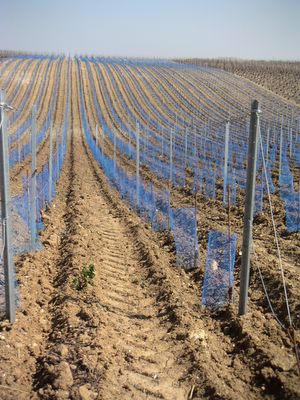 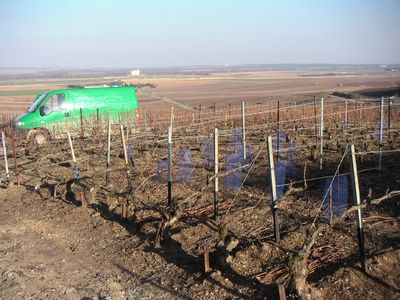