The seventh Thursday turns out to be the day, where I have enough guts to finally go for my first Cordon de Royat pruned while watching the time. I am probably the last one on the team to try this out.

Once again we are in Avenay val d'Or, where we prune and attach private vines in the Southern foothills of the Montagne de Reims. A charming landscape with very tiny and very sloping plots, all of them planted with Pinot Noir.

Now and then it rains, but as we are all dressed to stay outside, the drops seem a minor detail compared to the fresh air and the calling of the wild geese as they pass far above our heads. Spring is in the air, and the temperature has passed 10 degrees Celsius.

To me the most difficult hurdle on this course has always seemed to be the time. That is to prune your vine in less than four minutes. Well... and I do not pass the test, but at least I am not taken down by time. Instead I fail on one of the many little details you have to know by heart.

Take care of the future grapes
A vine pruned the Cordon de Royat-way will carry grapes mainly on its prolongement - a one year old branch at the end of the old cordon - and then as well on the coursons - the very short branches that grow more or less straight up from the back of the cordon.

As I have finished to prune one plant with time measured I note that it is éliminatoire to remove a courson without reason. Which is fair, I suppose, after all there are not many branches that actually carry grapes on a vine pruned style cordon.

Alain mentions that his mother always has said that the Cordon de Royat gives less grapes than the Chablis, and true it is as we count the average number of buds, that there are a lot less on a Cordon de Royat (appr. 10-12) than on a Chablis (appr. 15). The given numbers with the reservation that all vines are different, thus the number of buds as well.

It turns out that the permitted distance between the outermost courson and the prolongement is actually not the 10 centimeters, that is the rule for the rest of the coursons. In this extreme position as little as the distance of the entre-noeud - which is the equivalent of the distance between two buds - is acceptable. I am quite sure, now I will never ever forget this.

The instructor Stéphanie is also not quite happy with the way I shave the cordon. She wants me to cut the branches to be removed much closer to the cordon in order to make shure that all possible growth is eliminated. It is a matter of training and technique as it is physically quite hard to cut the hard tree. Even with a new ready for action secateur as mine.

But even I personally have diminished the future crop of the owner, I am still really proud that I have actually managed to pass within the time limit. Nothing else matters today.

The important systematism
Since I have been such a good girl to actually do the test, I stay and watch a few others do the same. Which brings out a few interesting details, that Alain has already mentioned, but it is always nice to see for yourself as well. The others make as many or as few mistakes as I do. Plus a few more of those éliminatoires.

For instance you must never leave more than two long branches on a Cordon de Royat-pruned plant. That is either two cordons, one cordon and one lancement or just simply one cordon.

This we all know, I am sure. But in the heat of the battle - watched by the keen eye of the instructor - you can easily miss something that is normally obvious to you. Especially if you do not stay closely with the systematism that Stéphanie has tried to teach.

However she has only said everything once, which for me is almost the same as never and thus a rather doubtful grounding of necessary knowledge. Now of course I am free to study the papers at home, quite probably all details are mentioned somewhere. The risk is to get something wrong as they are written in a rather complicated way. Even Stéphanie has chosen to write and distribute her own papers to explain things in a more easy way.

Basically you have a thin piece of metal thread covered with thin paper. You twist it around the branches you want to attach, you put your tool - the lieuse - about a centimeter under the loop. With a slightly bended left hand you keep your threads together, meanwhile your right hand pull the lieuse to the right. 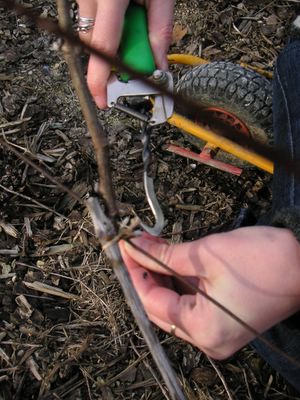 The hook of the lieuse ready in the loop.

The two opposing movements will twist the extremeties of the thread together in a hopefully rather tight binding that will help the vine to keep itself upright, as it grows more heavy during the period of growth that will soon begin. But not yet though. The pleurs-period, where the sap of the vine flows down the branches at each cut, has not begun.

My attachments are rather loose. I have to redo quite a few of them and foresee yet another weekend in the Chablis of my mother-in-law. If I want to enable myself to do these fast and well within the next few weeks, I will have to practise.

Today however no one can take away my happiness because of the fact that I have now once pruned a Cordon de Royat and stayed within the accepted limits of time.