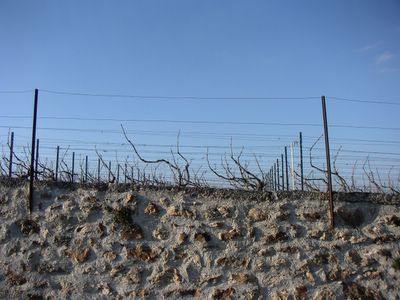 I have spend another Sunday morning in the Chablis-pruned Chardonnay-grapes of my mother-in-law. I still progress slowly... but I can feel, that the more plants, I prune, the more methodically I am able to work. And this more square way of working actually makes it a lot more easy not just to prune according to theory but also to make up my mind regarding all the exceptions. That is not counting the speed though.

I repeat the correct designations of the different parts of the plant, that I am working with. This helps me to learn the French names, hopefully so well that I soon will not have to bother too much about them. I will know.

Rachet, lancement
First the rachet, the little bit with its two yeux francs - buds that is - the rejuvenations of the plant, as the shoots, that in spring hopefully will develop from the two buds, in the next pruning season will be promoted to become the new lancement.

This means that this years lancement must be pruned on the best of the two shoots from last years rachet. From the buds on the lancement shoots will develop in the coming season and they will carry fruits. The lancement will be kept in a height of five buds . However you may have to make it six buds in order to be able to attach it to the first row of thread.

If none of the buds from last years rachet have developped nicely, I will not prune a lancement at all. Since a lancement cut directly from the foot itself will give no grapes anyway - a shoot direct from the foot of the plant is called a gourmand and is infertile - there is no reason why the plant should use energy in vain. Last weekend I have made several of this kind of mistakes, but since we now have realized excactly what it means, I spend quite some energy in order to avoid this. You may however use the gourmand to cut either a rachet with two eyes or - within the Chablis- or the Vallée de la Marne-system a rentrure. It is kept in the heigth of two buds too. The purpose with it is to create a new charpente if you need one 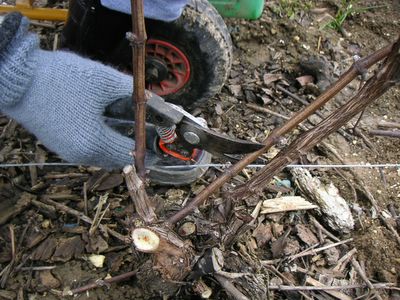 Ready to cut on the bias one centimetre superior to the second bud.

The last thing I do is to work with the three charpentes. This is the old wood on the plant, this is where the force dwells. This is what gives the grapes just the good qualities you want them to have.

Good energy in the charpentes
For each of the three old branches, the idea is an old part and an extension of a one year old shoot - the prolongement - this is the part that carries the fruits - the bois fructifére. You are allowed maximum five of these branches on each plant - the lancement included. The excact number depends on the distance between the plants. The longer the distance, the more charpentes.

Which is why I check the neighbouring plant before I decide to cut off a branch. If the neighbour is dead, my plant will be allowed much more room. Otherwise it is strictly forbidden to meet the branches of the neighbour. Each shoot must have enough space, and its buds must not be situated over or under each other.

My job thus is to clean up the branches, so that the necessary amount of them is always met. Though less if they bother each other. These phenomena are called superposition in case buds from the same plant will eventually bother each other and chevauchement in case buds from the plant will eventually bother buds on the neighbour. 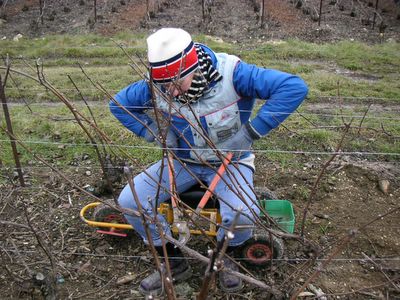 One charpente is sacrificed but not without careful thinking.

Now I brutally am able to remove charpentes, when I find it necessary. I even dare do it without asking Alain first. Which means that my ability in the field of being able to make independent decisions is on the rise. A good sign. I am also getting better at spotting mistakes and bad decisions just as the branch falls. Too late but still better than not discovering it. I still feel bad about it though. For example when I cut a lancement or a prolongement too short, because I measure it against the lower thread instead of the upper.

Rough news on the speed
I comfort myself with the fact that with my slow pace I am not able to cause that many problems after all. There will still be plenty of grapes even we try to control the amount rather throroughly through the pruning.

The weekend brings rough news regarding the importance of the speed. Already before the course began, I sort of suspected that speed could get some kind of importance. After all the diploma is the ticket to a piecework. A cousin confirmed on saturday that le grand jury quite so do care. Three tough men failed her years back because she worked too slowly. I chew on this one the rest of the day. I cannot make my self ask too many questions about how hard-working she was in her sparetime after all.

Sunday I can see that no matter what, I cannot prune faster than my mind can tell me what to do. But then it may be possible that these thoughts - as the weeks will pass by - could learn to hurry up a bit in order to make the fingers move faster as well.

My mother-in-law - I actually think she feels a bit sorry for her daughter-in-law - proposes to talk with one of her acquaintances, who participates in one of these apparently tough grands jurys. We decline... so far I still believe that it is possible to meet my objectives through hard work.