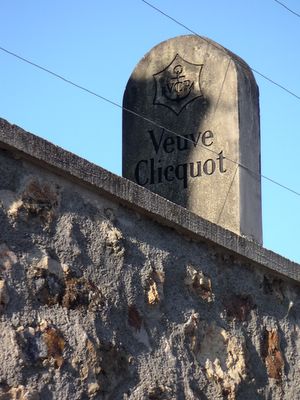 Veuve Clicquot has always been big in exports.

Forget about the crisis in the rest of the French winebusiness. In Champagne the sales of the local lux product is still great. In 2005 it even managed to rise another two percent compared with the year before.

The English, who traditionally always have bought a lot of champagne, seem almost unstoppable with a growth of 13 percent (Who would want to stop them anyway?) The spokesperson of the official body of the business, CIVC, is almost bubbly in his own enthusiasm.

"The English adore us, it's fabulous, with them champagne is almost a social phenomenon," says Daniel Lorson.

Faraway markets
Most of it - 58 percent - was gulped down in France, but the overseas market are developping too, says the CIVC. Daniel Lorson mentions especially Australia - maybe they have the feeling for champagne from the partially British roots? - and Japan. But China and India both show very interesting two-digit rates of growth as well.

And then there is Russia coming up. Good old Russia that used to be a great exportmarkedet for Champagne. It was through trade with the czar's court that the famous Veuve Clicquot - full name Nicole-Barbe Clicquot-Ponsardin - founded her reputation, not only as a great champagnemaker but also a skilled and far-seeing businesswoman.