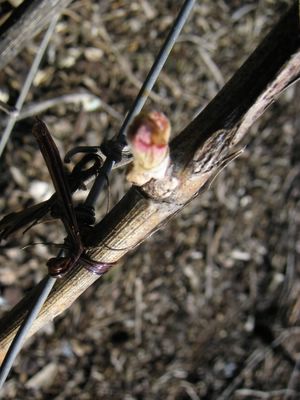 The new year of the wine is arriving these days. On the steep and southernly exposed slopes exposed just outside Vertus the first Chardonnay-plants have sensed the approaching spring. In the mildest corners the first buds are at the brink of bursting. Our Meunier-plants are not - even exposed to the south too - not that comfortable, and they are also not as developped.

But they too are awake and have been busy at the interior level of the cells for quite some time, started by more light and warmer temperatures. The overwintered nutrients in the old part of the tree have been mobilized, and the latex has risen to feed the buds, until the leaves are unfolded, thus able to take over the assignment.

The first exterior signs of life are, that the buds swell, and push the brown flakes aside, that have protected the bud throughout the winter. The tender buds covered by an extra layer of woolen protection peep out. As the bud continues its growth the first leaves are seen, not yet coloured green by the sun. Later the twigs will grow as long and rich with leaves as they are allowed to.

Parameters for growth
Several parametres influence when the buds will burst to let the first two leaves of the season peep out. The geographical orientation is important. Wine on a northern slope will burst later than wine on a southern slope. But also the variety matters. Thus the white Chardonnay-grapes start before the red Pinot Noir and Pinot Meunier. Finally your choice of porte-greffe matters.

All wineplants in France are grafted. On the top you find the wine, that produces the grapes - in Champagne Chardonnay, Pinot Noir or Pinot Meunier - on the bottom always an american type of wine, because they are resistent to the disease phylloxera. It is this supporting structure, that is called the porte-greffe. You choose your porte-greffe according to your type of soil, and that choise influences whether the wine will be an early bird or a slow starter.

Early pruning a matter of orientation
Finally the time of the pruning matters. If you prune late, it will delay the development of the wine at least for some days. If that is a factor when the pruning is planned, I do not know. But throughout the winter we have followed the big differences in when the pruning are carried out in two of the winedistricts of the region.

In the Côte des Blancs - where the Chardonnay rules - the work has started much more early than in Montagne de Reims, where the northern oriention and the Pinot Noir mean a later development and more time. Here the rule of thumb is that pruning only starts after Saint Vincent on the 22nd of January. At this time the winegrowers in the Côte des Blancs had already worked for 1-2 months. They do not have much else to do in November and December, but in February they are busy with ploughing, harrowing and sowing their other crops. In Montagne de Reims they only do wine.

Almost everybody however is finished now. Both with the pruning and with the attaching of the wine. Very few plots are not ready for the new year, and for this industrious majority there is not much left to do apart from waiting. Maybe lend an ear or two to the predictions of Meteo France of the temperatures of the coming night.

Frost is now the enemy
It is now - right at the bursting point of the buds - that the night frost, which is still a major risk, can destroy a greater or smaller part of the potential of the year. As soon as the buds have burst and have grown a day or two, the new leaves are hardened enough to resist temperatures below zero.

Only three percent of the vineyards of Champagne are protected against frost with lamps, irrigation systems or other frostfighters. The rest must rely on their evening prayers. Maybe I should begin to consider this possiblity too since after all twice in 10 years we have lost some of the potential due to late frost. 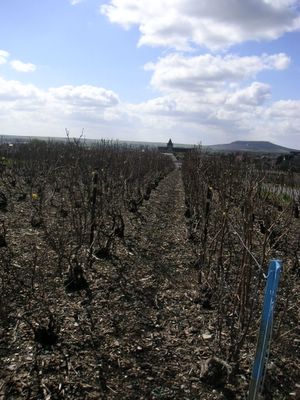