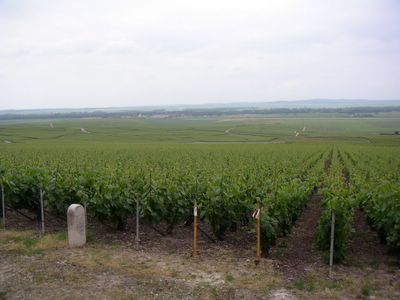 We regularly discuss about developping some kind of winetourisme. The other day we found that we have been beaten by the great lady of Champagne.

However, it is not shame to loose to Veuve Clicquot Ponsardin. Especially when you are not really going yet. Anyway, the idea is fine.

Day of the garden in Verzy
A couple of weekends ago it was "day of the garden" in France. It is a weekend, where the public are invited to visit gardens, that are normally closed. And here in Verzy, the successors of the widow had decided to open le manoir. 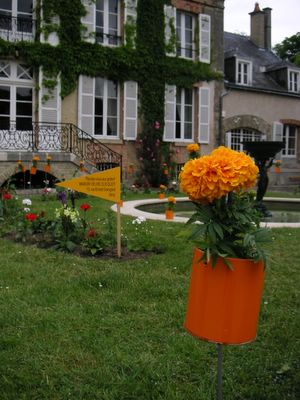 The front garden dressed up in the orange colours of the widow.

The château of Verzy has more in common with a big villa though. IF you however take into account that the big - some would say useless - park extends to a unknown amount of hectares in a Grand Cru area, where one hectare would cost you at least one million euros, the distinguished name makes much more sense.

The garden swells with beautiful roses, wellcut hedges, a little pond, a chinese greenhouse and tall, old trees. However, we were a lot more interested in the plots on the other side of the open gate.

This is where we found one of the big terroirs of the widow. The grapes from Verzy are Grand Cru - supposedly superiour quality - and they are used in the vintages champagnes, that bear the the name La Grande Dame. 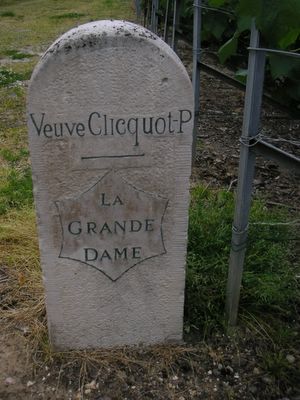 This stone next to the wine mentions the product.

Close encounter with great terroir
We could thus determine that the fences that carries the Pinot-Noir plants, were a bit more advanced than our own practice. The double thread that is lifted a couple of times during june can hear be placed in three different positions instead of two.

It all comes down to an amount of manual workhours. And of course you can afford more people working longer hours if your final product is worth more money.

We also balked at a series of names, put on nice and oval plates in the orange colour of the house. Then we realized that this is actually winetourism in its uttermost manner of elegance and elite. 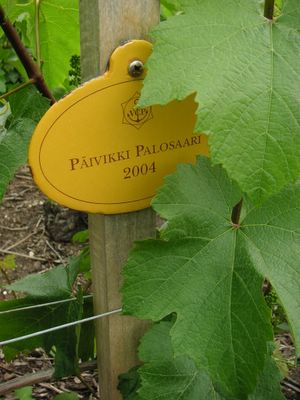 A Finnish citizen experienced the supervendange of 2004.

Veuve Clicquot Ponsardin accomodates its most prestigious clients in the château in Verzy during the grapeharvest, and they will cut a few symbolic grapes, after which their name for all eternity will be put on a plate and placed in the wine.

We suddenly realized why the widow do not seem to rent or borrow her manoir, not even to staff...

You can find a lot of interesting information about the different cuvées of Madame Clicquot Ponsardin and the special conditions for each terroir in each year, if you have the patience to click your way through the complicated hiearachies of the company website. 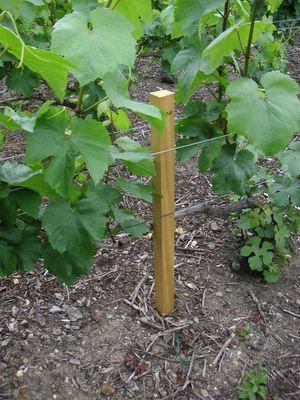 Ready for a new elite winepicker of 2005.

Now, of course we do not have any illusions that we will ever combine a long weeknd in the château with vendange using guilded scissors. However the basic idea is good.

You can add, that Champagne is situated just one and a half hours drive from Paris, is known by all the world and with a prestige that only few can equal. On top of that it is one of very few wineareas left in France, where the wine is still manually harvested. The summerjobs of the 80'es harvesting the wine of southern France is close to a thing of the past. Machines are cheaper and you can work more efficient as explained to us recently a vigneronne of the Côtes de Castillon close to Saint Emilion.

Oldfashinoed harvest is out
Also in Champagne times are changing though, and still more vignerons hire a team of people from Easteren Europe or gipsies, that will take care of their own catering during the grapeharvest. But some places remain where the vendange takes place in the oldfashioned way. Like with us and the rest of our family in Soulières just off Vertus in the Côte de Blancs.

This means that a team of pickers live with us during the week of the harvest and will get a part of their wages as food and lodging. The work is hard, the atmosphere special and the entire thing ends with party, drinks and dancing.

Wine in Ile-de-France
We are not the only ones with this kind of ideas. The association of winegrowers in Ile-de-France - even closer to Paris than we are - at the moment considers ways to make money on some of the 45 millions of yearly tourists in Paris:

"We are far behind, when it comes to winetourism", says Christian de la Guéronnière, chairmain of the association Vignerons Franciliens Réunis, to decanter.com.

Now he has taken the lead, and will distribute maps over the 145 vineyards of the area to the touristagencies in Paris. You can also find them here.