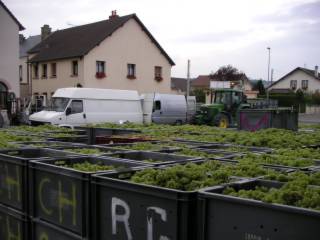 The coop has its heyday of the year these days.

We are now halfway through the grapes, that is theoretically anyway, because it is not easy to know exactly, where the middle is, since the plants not carry the same amount of grapes. Also the length of the rows vary, they are even in three geographically different locations. On top of that the quality of the grapes vary. This year is is in general high, most of the grapes are pretty mature and only a few are diseased or rotten.

Now we have stopped completely harvesting the less nice grapes, and also those at the bottom of the plant or the most difficult ones squeezed inbetween branches, eachother or the metalthread are left. Also even foreman Gerard says the best ones are at the bottom, because the flowering starts here, which makes them the oldest.

On this the fourth day of the harvest we thus don’t follow the rules from the ministry too closely anymore. Maybe because there exist several different interpretations of it. Some says, it means you must cut all grapes even to leave them on the ground. Others say you must cut grapes in each row but not necessarily take everything. Nobody seems to have read the text themselves.

Whether you must interpretate in one way or the other, one thing is sure. A man from another village in the neighbourhood has according to the harvest gossip – we got the story tonight from cousin Jean-Michels wife - had four rows harvested by somebody else, which was definitely a mistake. In years with too few grapes to harvest it may happen that somebody will steal some of your grapes straight from the plant in the night or try to get grapes from other areas to deliver as his own at the press. This is why you these days see extraordinarily many policecars around the roads. Your risk is to be caught and loose the license to grow wine or your living for most people here. But years like this one where everything – however you understand it – is to cut, only people with very limited brains would actually hunt for grapes in the neighbours fields.

For the time being we stay where we are. Geographically and kilowise. 6200 green Chardonnay-grapes were shippes of too the presses in Vertus today, the same amount as yesterday. Even the muscles seem to be getting used to the new times with fysical work on your knees or like me sitting on the bum, eight hours every day.